Where to on Brač?

"The land of the 1000 islands", as they coo it, Croatia is recognizable in the world for the scattered patches of land in the Adriatic Sea. Scattered and shaped by natural forces or by the hand of God as pearls on a turquoise surface, it doesn't matter. Every one of these islands is our nation's pride and, although we cannot even list all of them here, we can present you a short info/guide for the southern Croatian islands that find themselves between the two Dalmatian gems, Split and Dubrovnik. The best, and in most cases the only way to reach those, is by boat.  We will unravel them to you one by one in our Archi(ve)pelago series, handing you the best places to visit, to eat, to drink, to swim, to anchor, to relax.

Laid down just in front of Split, Brač is the biggest of Southern Dalmatian islands, and you won't regret making it your number one destination. Sailing out from our office, you either head toward the northern or the southern side of the island. For everyone's sake, especially mine, let's make a virtual clockwise trip around Brač. The first town you see on the NW peak of the island is Sutivan. Sutivan is a small town, even in Croatian terms. With a new breakwater for the pioneers like yourself, it is perfect if an available berth is spotted. According to TripAdvisor, you should enjoy Bokuncin situated on the promenade and the small beaches around.

Bonaca is a restaurant to look for in Supetar, the next town along the coast to the East. Not so much represented to the nautical charter world, something that is about to change, Supetar is still the typical Dalmatian coast town, full of tourists and events in the summer. The beaches around like Tri mosta beach, nudist beach in Mutnik bay, or the cultural treasures inside the town are the best for relaxation. Don't get too relaxed in Mutnik bay! :) Dolcevita walking tour is something to recommend if you fancy a stroll in the countryside with wine and specialty food as refreshment . The one restaurant we can recommend from our own experience is Konoba Kopačina, further inland in the village of Donji Humac. You can taste almost all of the best specialties Brač can offer there especially „janjetina na špicu“ or spit-roasted lamb. Unlike the majority of Dalmatia where the lamb roasts on a spit roast in full, the meat in „janjetina na špicu“ is first chopped on medium-size chunks and then put on a spit roast. Check the best dishes and restaurants on Brač!

Splitska bay is the next stop along the coast, with Zastup bay next to it, forming the shelter for boats caught up with NE Bura wind to which this side of Brač is exposed. Best known for the small port from which the stone for Diocletian's Palace in Split was being shipped, Splitska is a good choice for mooring and exploring the inland. The ancient quarry with the relief of Hercules is a testimony of the primal connection of stone and Brač people. Stonemasonry is one of the symbols of Brač, as many stone masters originated or apprenticed on Brač, the most well-known being Ivan Rendić from Supetar. This tradition is nowadays represented in Pučišća, a village further east, which you must include in your route. Only 2km from Splitska, a beautiful and the oldest Brač village of Škrip is the one to look for. Situated on a prehistoric site, inhabited firstly by the Illyrians, which left their monumental walls, afterward used for building the Roman mausoleum, middle-age fortress, and nowadays providing the foundations for Museum of Brač. This museum is a must-see venue as you will be able to experience, through the findings exposed inside, this couple of thousand years of connection between several civilizations. The peace and calm of the surroundings, the old stone houses, Oil Museum that leaves you with a fine taste of olive oil in your mouth, and in awe of the old ways, are the baits that will lure you in for a walk or a ride to Škrip. However, if you really want to feel Brač, explore the inland further with the local people, check ExploreBrač tour for an amazing experience.

The next stop is Postira, the fishermen's village, primarily known for its successful fish factory/fish process facility Sardina. One of the most interesting events in the village is the Little Night Regatta. From there, you can make another trip inland to the picturesque village of Dol (eng. valley). One of the stops should be Lovrečina Bay, for obvious reasons of divine enjoyment.

After Pučišća, if you've already become an Adriatic junky, you can stop by at Konopjikova bay for a quick swim, or reach a shelter if the weather catches you unprepared. The next bay Luke is the more comfortable one. Popular in the nautical world as it deeply cuts inside the land, protecting from winds, but also has a nicely reviewed family restaurant Konoba Rojen where you can enjoy the traditional dalmatian dishes, made in a simple but very tasty way. Just across the bay, the belltower and roofs of Povlja shine and invite you to a visit. Don't disappoint!

Reaching the eastern side of the island, circling back towards the south, Sumartin finds itself in a perfect place to hide you from Bura. You can check the bits and pieces of its history and the beautiful bays that surround it, or go inland and check the village of Selca. After that, just continue sailing west following the southern side of the island until you reach the, for many people, main attraction of the island, Bol. One of the symbols of Croatian tourism, Bol is famous for the Zlatni Rat (Golden Horn) beach, but also well known as a haven for kite surfers as the winds get to be pretty strong in front of the town, so beware and don't plan to anchor there. Good to know, you can try one of the best mojitos on the Adriatic in Bol. We've covered that in our Best Mojito de Lito blog, check it out! Above Bol, a small but functional airport (one of only two situated on Croatian islands) finds itself. Just in case. :) 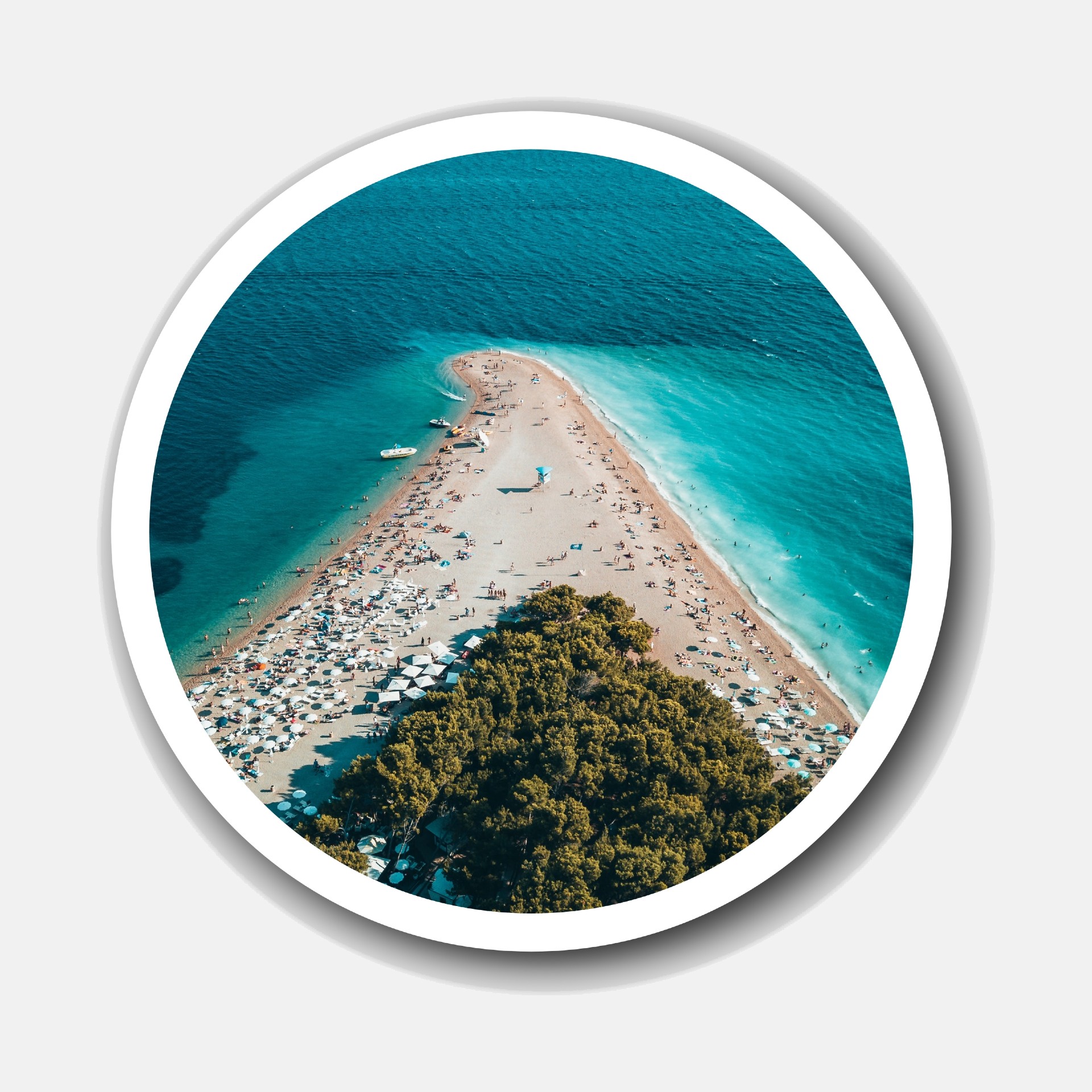 If you are a real enthusiast, you can pay a visit to Vidova Gora, the highest peak of Brač, as well as all Croatian islands with its 780m height, with stunning views of Brač and surrounding islands. Continuing westward, make sure you save enough time for breathtaking beaches and bays from Dračeva Luka bay and Murvica beach, across Slatina beach, Ciccio beach, the so-called Romantic beach, all the way to Blaca bay. No special bay, but it forms an ideal way to reach Blaca Monastery, a hidden gem telling a tale of human ingenuity and hard work. Something similar you can also find between Blaca and Bol. If you go to the village of Murvica above the aforementioned Murvica beach, you can find dragons in stone!

The final stop of your Engulfment of Brač is the town of Milna. But before you sail in the port, you should head to Lučice bay, a favorite anchorage for sailors sailing in these parts. In Milna, the typical Dalmatian coastal town, explore the narrow streets for something interesting and grab a bite in one of the town's restaurants like Navigare. You are safe here as the harbor is one of the best protected in the whole Adriatic, exactly the reason why it is so popular in the charter world as a starting point. If you plan to berth there, you should make a reservation. After you've eaten and accumulated enough strength, and now that you can call yourself proper Bračanin, you can head on straight to Mrduja and give your contribution in Tugging of Mrduja toward Brač, or plan your visit to participate in Mrduja regatta! After the straining effort, relax in Bobovišća bay, popular among the sailors from the ancient time, due to its natural protection from winds.

All in all, you won't regret or forget a visit to Brač. The island with a long history of inhabitation, and an even longer connection with stone. A house, doorstep, wall, grave, fort, church. Everything seems to be made of stone by the hand of local stonemasons. Except for the boats and the food. Delicious specialties and wine from the steep slopes of Brač, fertile slopes that hide deserts and lead you to the beautiful oasis on the banks of the Adriatic. Cannot allow yourself to miss all of this! 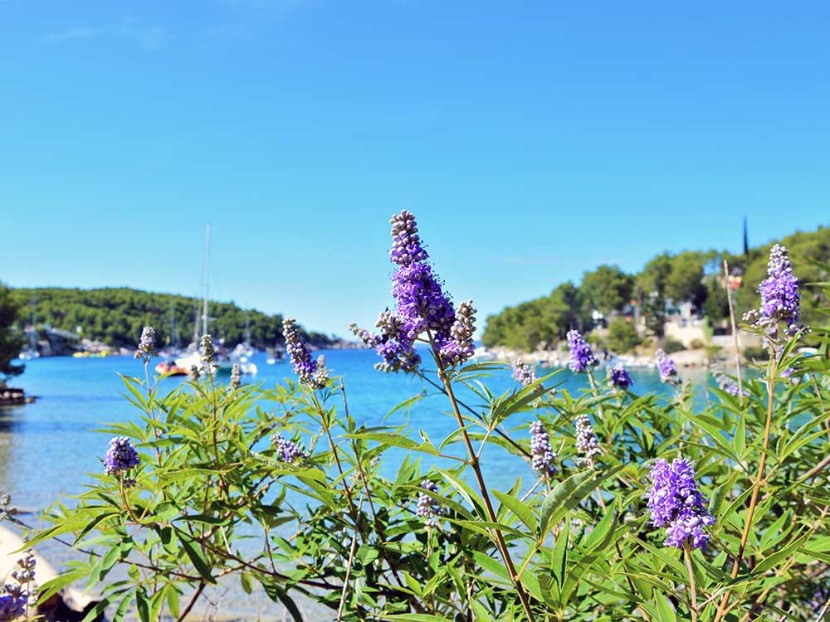