You would be one of 12000 lucky ones if you find a pearl in an oyster as those are the odds if you start opening them one by one. Yet again, if you live in Croatia you would have four of them in your sea without moving a finger.

An oyster. Ever tasted one? Opened it up while the gentle scent of the sea fills your nostrils? And then, when, if you do it for the first time, you overcome the urge not to put this alien-looking thing inside of it in your mouth, slowly, with care, you realize the fuss everyone makes about it. The salt, as if taking a shot of tequila, comes first to get you ready for what's coming. What comes is a sweet, sweet body, buttery savor with metallic hints that covers all of your taste buds and leave you slurping for more...if you don't swallow it without chewing, that is. Supplementing it with a quality white wine will finish the experience and finish your inhibitions as well, relaxing you completely. Is it this sensation or zink inside that serves as a testosterone and dopamine trigger, you don't care one bit at that time. It can't get any better! Or can it?

The only thing that can beat the taste you find inside an oyster isn't as chewable, but the dopamine surely blows your mind off if you see this product instead of the aforementioned alien-looking thing inside. That's because, if you were lucky enough to open the oyster and find a pearl inside, you'd forget all about the taste and smell. 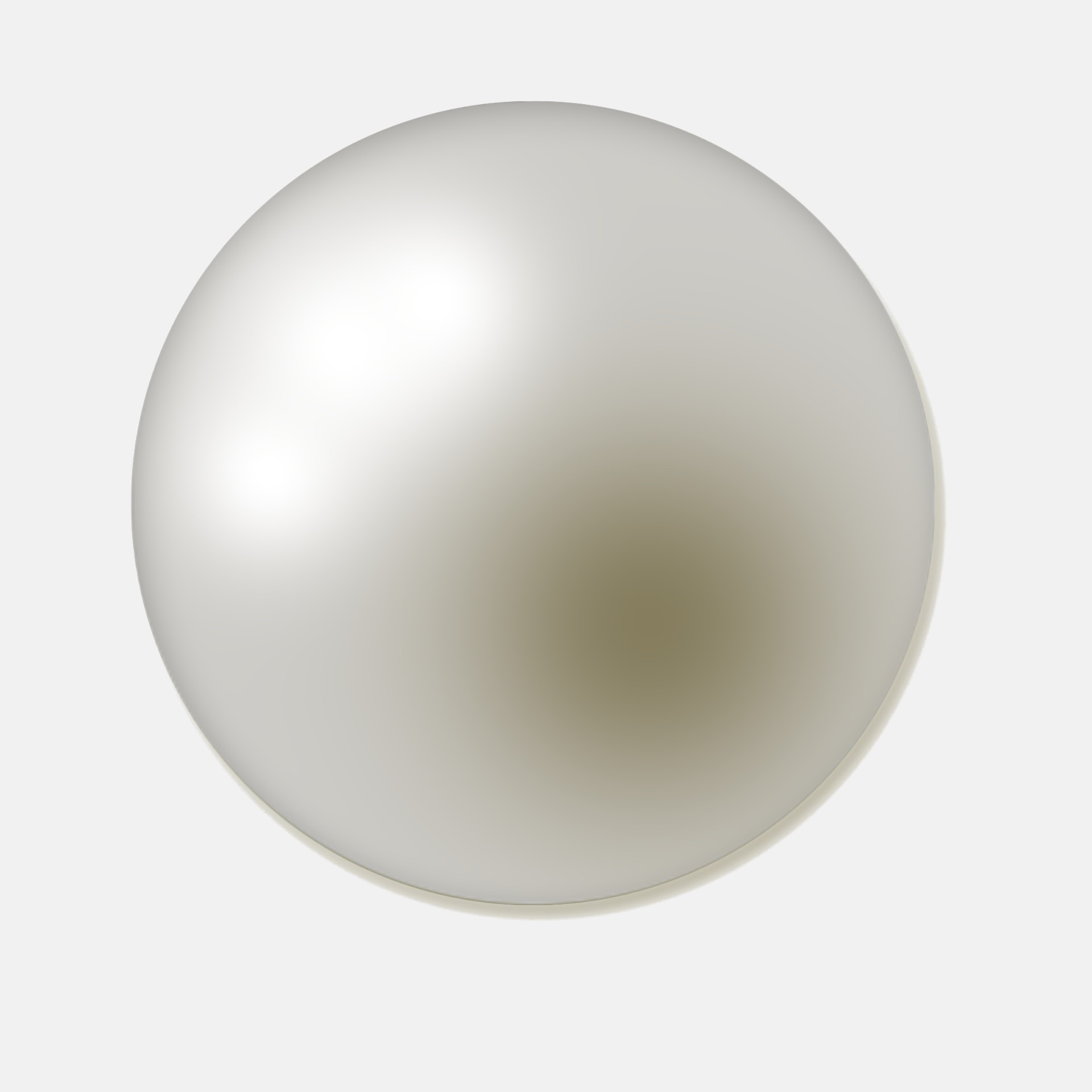 Pearls can be natural, formed over time inside the oyster when it creates a substance called nacre around an alien object, an irritant, found inside the shell. This nacre is what we admire so much. Layer upon layer of it creates the smooth, round surface of the pearl as we know it. Nevertheless, not all pearls are round, and not all are smooth. Saltwater pearls are often irregular in shape, and true pearls will feel gritty under teeth. It is different in cultivated pearls, ones artificially created by men through a surgical process of inserting an irritant inside the shell, "helping" the oyster in pearl production. Needless to say, natural pearls are of more quality and extremely rare. You would be one of 12000 lucky ones if you find a pearl in an oyster as those are the odds if you start opening them one by one. Yet again, if you live in Croatia you would have four of them in your sea without moving a finger.

The official Pearls of Adriatic, in this case, are the National Parks across the Adriatic Sea. These natural pearls formed a long time ago without any help from a human hand. Layer upon layer, they added their nacre, every one of them different in its own way, and yet so similar in its simplicity. Along the way, they couldn't escape the inevitable human influence. The results are astonishing natural beauties, cultivated over the years and protected under the shell of Croatian Nature Conservation Law and displayed for everyone to see. 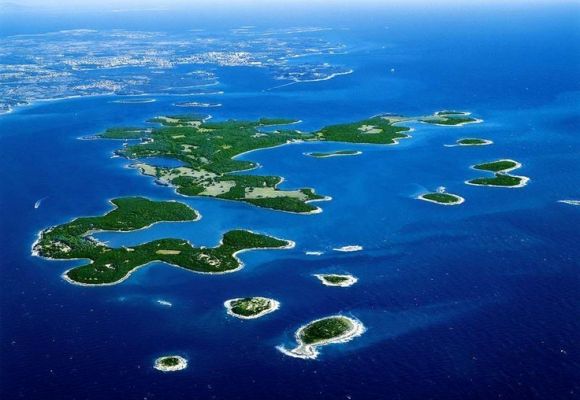 To proclaim Brijuni as National Park (happened in 1983), the islands had to separate themselves from the mainland, and the dinosaurs had to be convinced to leave. The old natives did that with a little trick that involved a ball of fire coming from the sky. The dinos weren't so happy and fled stomping, leaving footprints on Brijuni to be remembered. A lot of individuals and groups left their footprints on the island since that. The attractive location, climate, greenery, and animal life led to the islands becoming a Roman Emperor's residence, a place of leisure for wealthy men of the Middle Age, a paradise for mosquitos and malaria they brought to the island, all the way to the start of the modern tourism and the president Tito that had his residences on the island. You can READ MORE   about Brijuni as there are a lot of interesting facts about these heavenly islands.  Nowadays, they are best known for the flora and fauna of the island. Lots of indigenous species of Istria and Croatia, mixed with some imported animals and plants, create an interesting cocktail that will get into your head when you come for a break in National Park Brijuni. Just as James Joyce did in 1904, and happened to stay in Pula for a while. He may refound Ulysses in Croatia, who knows? Nevertheless, in his honor, Ulysses Theater takes place on Brijuni from 2001, founded by Croatian famous actor Rade Šerbedžija. You can see classics and some new pieces of drama from the best Croatian actors in July and August. 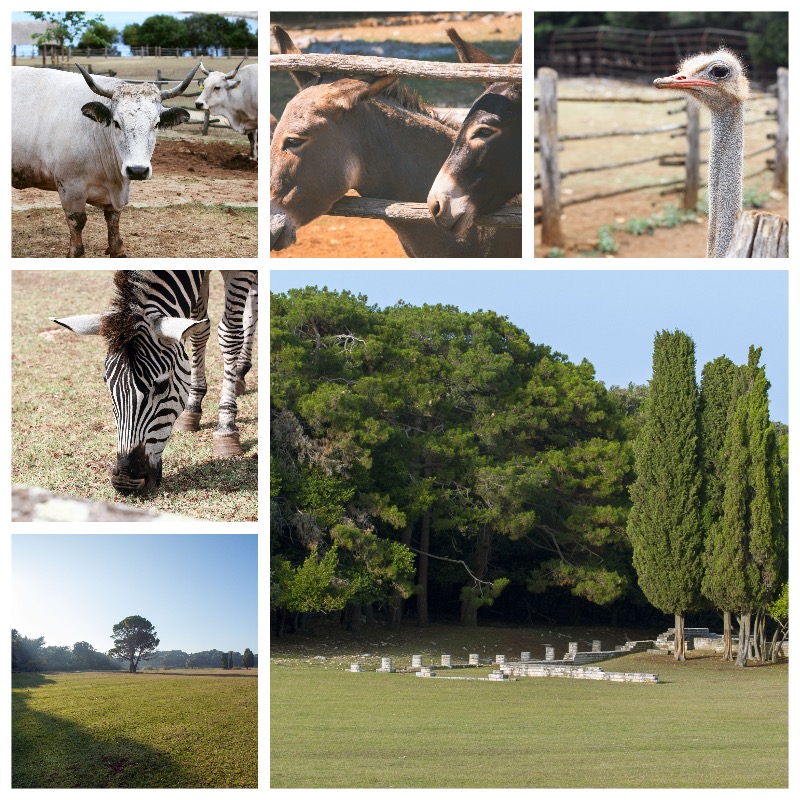 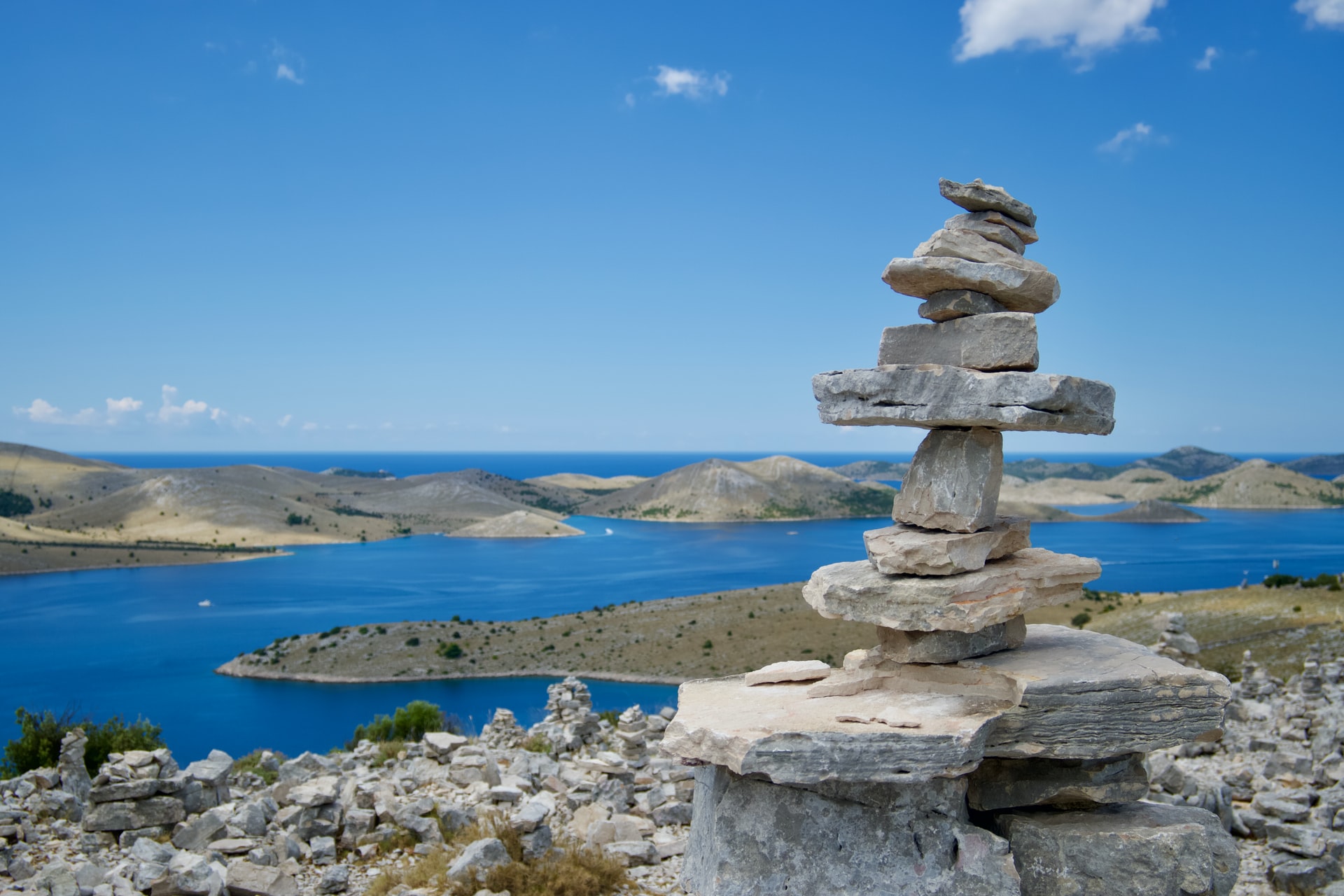 Further down the Adriatic, right in the middle actually, Kornati islands emerge as an archipelago of jewels on the bright blue surface. Nothing so special about these islands when you lay it down to who inhabited it, what grows on it, or what you can do on it. These are barren islands, forming a labyrinth with its sea passages, looking as sprinkled upon the surface in some childish play of God. No hotels on them, no touristic resorts, and no possibilities to build ones either. Even dinosaurs did not set a foot on them, it seems. But the beauty of it can not be mistaken. Looking at it from the sky or your sailing boat while you coast between the numerous islands of the park, you get to know them and the waters around. Know it as if finally understand the meaning of the islands. They are completely privately owned by the families from nearby Murter. These men came to Kornati to catch fish, leave their stock to graze on the island, and take care of the olive trees. Over the years, to protect their sheep and cattle not to wander around and get to someone else land, they built an astonishing more than 300km long dry stone walls as borders. Those you can see all across Dalmatia, but the Kornati ones just add up to the story of lifting such things from scratch. Just imagine how many working hours took to accomplish such a thing, and these people only spent a few days on these islands a week with their boats protected from winds in numerous bays around.  These bays, the winds, the channels between the islands, and the crystal blue sea is what attracts people to visit this park as frequently as they do. The serenity helps as well. Even though you will see a lot of sailing boats around, the vast space can accommodate everyone while still keeping a sense of isolation. To claim a bay was ever so easy. To learn more about this National Park founded in 1980, visit this web page  and to reach it with a sailing boat just contact us and follow our route from Split. 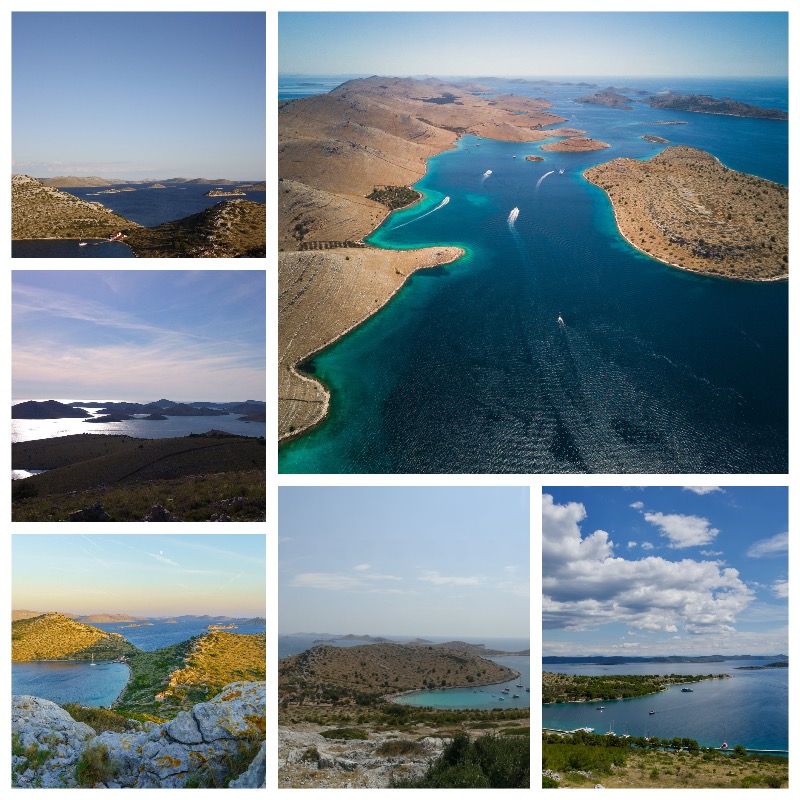 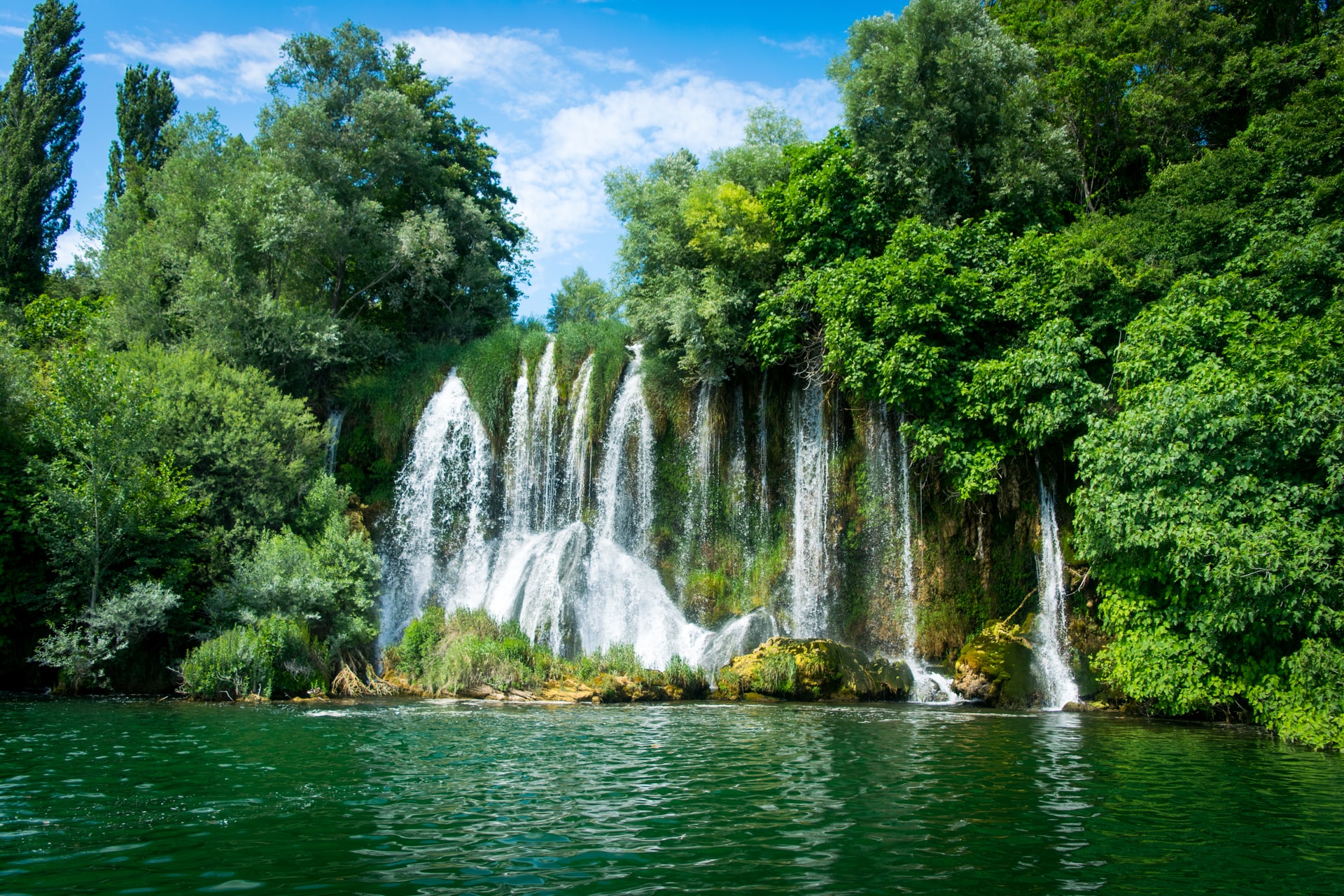 Not on the Adriatic Sea directly, but connected to it in a physical, historical, and cultural way, National Park Krka founded in 1985 on the Krka river is the freshwater pearl of Dalmatia. Following another of our routes you can easily reach it through the Town of Skradin located in the mouth of Krka where it connects with the Adriatic. The beautiful little town serves as a portico to the water heaven of Krka. Coming down from the hinterland, the Krka river pours itself across the Dalmatian karst, carving the rocks in beautiful shapes, canyons, and waterfalls, the biggest attractions of the park. The history flows with the river as well, as numerous stories involving the Krka and its inhabitants are told. From the prehistoric man finding the shelter in the caves above the waterfall Roški slap, Romans building one of the most important army camps in this area, dozens of Middle Age forts protecting the passages, watermills, monasteries, and other treasures of the park.  The canyons, the lakes, the waterfalls, the barriers, the mills, the fortresses...they all tell a story of men living in these lands, fighting for their families, freedom, and their faith, that is carved in them as Krka carves the stone they live on. The most well-known are, of course, the waterfalls. Roški slap is the 15m high waterfall coming down into the Visovac lake, the home of the Visovac island. This beautiful little piece of dry land in the middle of the lake should be your stop toward Skradinski Buk as you can visit the monastery and museum inside. Your guide will be the beautiful peacock that found permanent residence on Visovac. The last of the beauties of Krka National Park, but the true nacre of this pearl is the Skradinski Buk waterfall. 800 m long and 200-400m wide cascades finish up the 45m elevation from the beginning to the end of the waterfall. And what a fall that is. All the snake-like lines and streams of the Krka river passing by a variety of plants, herbs, and old mills, come to end and drop down in a beautiful river bay. While hiking, you can even take a swim in a designated area. We bet you've never swam in a pearl before! :) Did you know that a hydroelectric power plant on Krka started producing electricity only few days after the one on the Niagara Falls? Many similarities between these two waterfall beauties, but please do not start any barrel rides here. You can read much more here. 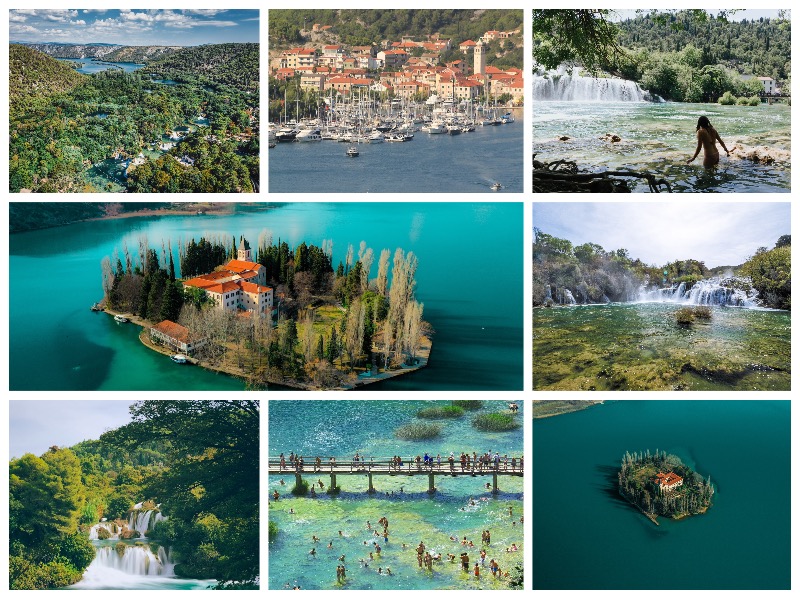 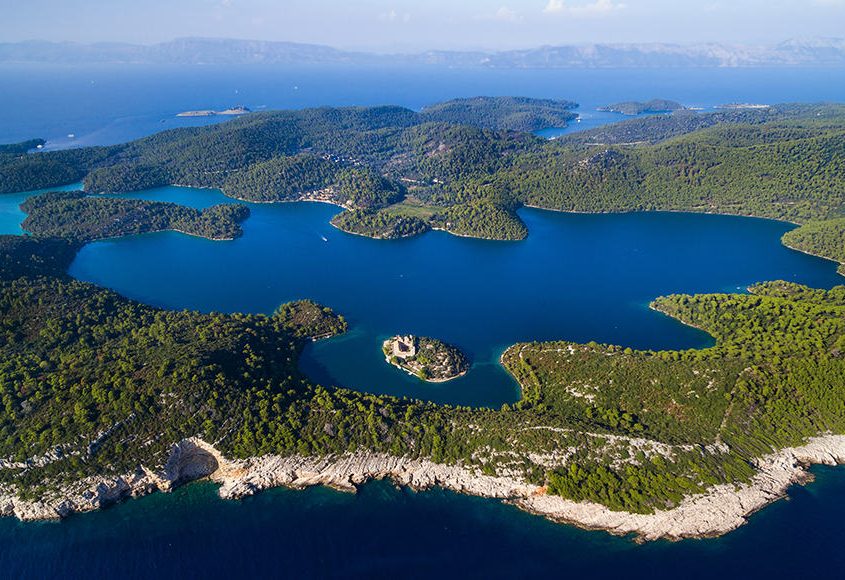 "Imagine there's a heaven, it's easy if you try."  The oldest of the Pearls, National Park Mljet was founded in 1960, and it's easy to see why. This heaven of green and blue has been inhabited since the Illyrians, to Romans and other civilizations of the well-known Adriatic cocktail of rulers along with the Croats. Nevertheless, it seems that one famous fellow got there first. The great Odysseus, according to the tellings, spent his seven-year-long holidays on this island, Ogygia, or Mljet as we call it now. We can list him up as the first tourist on Mljet, and a great promotor of it as well, as millions of people read Odyssey. Lots of descriptions of Ogygia can be connected with the present Mljet, the most obvious ones being the four water sources on the island, and the so-called Odysseus' cave on the south side of the island. More about this legend and Mljet you can read on the same site. To sum up in words something that cannot be summed up in words, one could say that this island is the cure you've been searching for. A beautiful island in a beautiful sea that pours in through a narrow channel and forms not one, but two saltwater lakes with incredible animal life is on itself a reason for a visit. Adding up that it has its own island with a beautiful monastery from the 12th century, a spring of culture spreading outside the island borders, various endemic plants and herbs, and scenery that blows your mind in any part of the day...you couldn't ask for more. Nevertheless, Mljet will give it to you, and more. 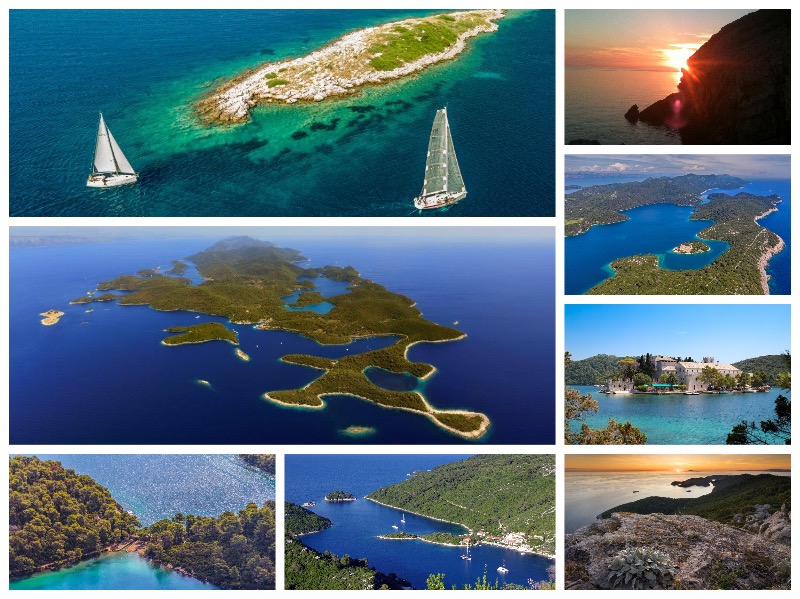 You can check Mljet using one of our routes with one of our sailing boats. This will give you the chance to see the pearl of the Adriatic, but, on your way, you can make a stop and actually taste one of the best natural products of oysters in Ston. Don't know if you will have the stomach or nerves to open 10 000 of them to find your own nacre-layered piece of irritant, but we guarantee a lot of fun, aphrodisiac, and wine to make your own long-lasting life-irritant by your side less emphasized. :)