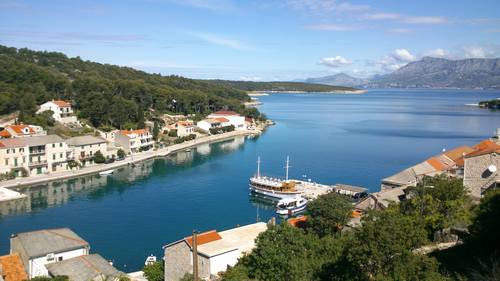 Go with the flow is not your thing? Always want to fight the tide? Easy is cheesy for you? That's why we have our off-route for you. Your first day, as everyone is heading toward the more popular destinations and racing to catch a berth or a buoy, we will reveal the hidden gem to you. Povlja on the island of Brač is a small village in a beautiful and wide bay with several more that follow on the sides. Once a small Roman estate, the village prospered in the 12th and 13th century, evidence of which was found in Povaljska listina (Povlja chart), the first document written in Croatian Cyrillic letter that depicted lots of the customs, history, and estates on Brač and other lands of that time. Nowadays a quiet touristic place, Povlja is ideal for a slow start without summer chaos. Bars, restaurants, diving school, jet-ski charter...just choose a buoy and head on a beach and town tour to get to know the customs. 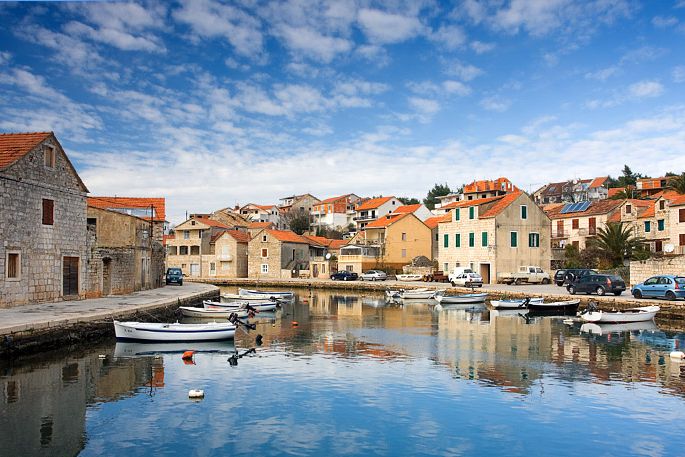 From a small town to a small town, but even more beautiful. Vrboska on the island of Hvar is the logical next step in this unconventional tour.  In the middle of the Hvar island, indented westwards in a narrow bay, a picturesque town shines as a hidden jewel in a rich Croatian crown. One of the smallest towns on Hvar, regarded as „Little Venice “, Vrboska will steal your heart as you will fully understand the comparison with the Italian sister. The old, tightly packed houses, with elements of Gothic, Renaissance and Baroque style, all inside the secluded bay is exactly what you need to rest your eyes and soul. For those shameless souls in love with nature and the simplicity of nature's products, the island of Zečevo with the FKK beach is a way to go. Pebble beach, in combination with pine trees forming shades and the solitude, will give you goose bumps (don't be rude!) and make you forget your own existence.

Sail on and follow the coastline of Hvar toward the west. As someone took a knife and started slicing along the cape, numerous bays increase the possibility to find a bay just for yourselves. One of the well-known ones is Tiha bay consisting of lots of smaller bays that can be your next stop for this day if you just want to swim and relax all day. We must warn you, this is a frequent nautical stop, so maybe avoid this to be consistent with the off-route premise.  In that case, the town of Stari Grad awaits you since 384 BC when it was founded by the Greeks as Pharos. It is the second oldest Greek town in Croatia after Issa on Vis, with numerous sites and buildings that speak of history and tradition from that and previous age, all the way up until our time. First of all, your vehicle. It would be wise if you intend to tie the boat on the promenade in the town itself, to reserve it in advance as it can get crowded. The other option is to catch a buoy out there or in some of the bays around the town. When you set yourself free, start exploring the town and dive into the old times. Imagine the old Greeks coming into the same bay as you with their ships (no problem with berths for sure) and settling on this fertile piece of land. They exploited that and created their parcellation in the long field to the east of the town, nowadays the oldest example of that kind of parcellation in the Mediterranean, making it one of the most important pieces of cultural heritage in the world, which UNESCO recognized in 2008. Along the field, going further inland, there are a lot of small stone churches, tiny old stone houses and the remains of villae rusticae, Roman holiday houses. One other thing you will notice wandering around Hvar is the smell. Some will notice it immediately as it will resemble to those from their private quarters back home, only that one is mixed up with lots of smells and odors and…anyway, on Hvar it comes from the vast fields of lavender that grow all around. The same case is with the wine and vineyards. I’m not talking about the smell. You should go for some of the indigenous wine sorts such as Plavac Mali. The reason behind all these growing and prospering on the island is the climate of course, as Hvar is “the sunniest Croatian island” with around 300 sunny days throughout the year. In the town itself, a more modern holiday house, dating from 16th century, belonged to one of the noble families of that time, the family Hektorović. The head of the house at that time, Petar Hektorović (a famous Croatian poet in his free time) has built Tvrdalj, a semi-castle, semi-holiday house that attracts tourists with its architecture, inscriptions in Latin and a fishpond in the middle of the complex so definitely check it out. Other interesting places to see include several churches, Biankini palace with an art gallery, and an old windmill. Spend the night with the old Greeks and their heirloom. 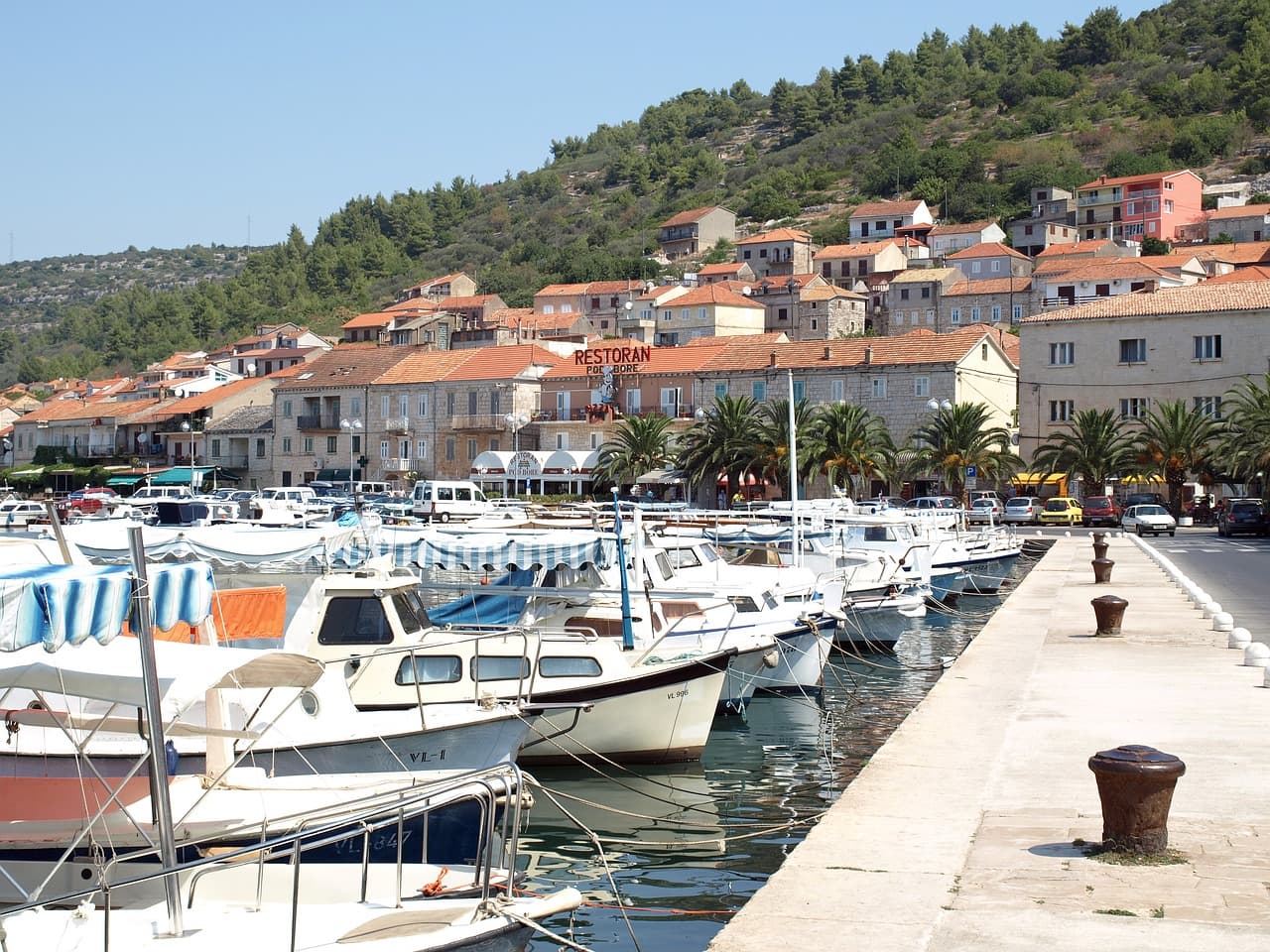 In the morning say your farewells to the history and cut the usual route and pit-stops such as Hvar and Pakleni otoci and head towards the island of Korčula passing the island of Proizd on the way. The island of Proizd is famous for its lovely beaches, recognized by the Daily Telegraph as one of the top 5 beaches of the Adriatic and as one of 12 best places for a daily trip in the world by the New York Times...so yes, we most definitely recommend stopping there, diving into the blue water and catching a tan on its pristine beaches. Refreshed and with a wide smile on your face, continue to Vela Luka on the island of Korčula. Vela Luka is the biggest bay on the island and consists of a series of smaller bays for you to enjoy. It is the best-protected harbor and a safe place to spend the night with a gas station to fuel up. While here, go in one of the numerous "konobas" in Vela Luka and ask about Oliver Dragojević, a late legendary Croatian singer that was born in Vela Luka. You will be up for amazing stories about this great man and a song and dance follow up instantly and naturally while drinking wine and eating delicious food.

With sore throats and a heavy head in the morning go west until you reach the eastern side of the island of Vis where you will come to the small islands of Budikovac and Ravnik. The tour continues with the Green cave on Ravnik island, nature's works of art. Winds and waves have carved in the amazing sights inside and outside of hard Dalmatian rock making astonishing color patterns. Keep your jaws and phones checked in order not to fall into the sea. Coming to the beautiful Budikovac you can sail into the lagoon where you will find an amazing pebble beach, but bear in mind that it's quite shallow and there are some underwater rocks on one side of the Laguna. Now sail on to the town of Vis. Before getting there, you can make a stop at Stončica bay with a beautiful sandy beach and a lovely restaurant. Perfect time to get to know „picigin “, dalmatian beach sport. Time to visit Issa, the first Greek colony in the Adriatic, after you were introduced with Pharos. Inhabited since prehistory, Vis as an island was on a perfect geographical position on the Adriatic Sea routes. It was Illyrian before the 4th century BC when Syracuse founded the colony of Issa. Afterward, it was a Roman town. Nowadays a typical Dalmatian town, beautiful and full of history Vis has a lot to offer. We recommend staying overnight and seizing the day by going on Vis – Military tour (the island had an important role in World war II and afterward was isolated for more than 50 years by being a former Yugoslavia naval base till the latest war in Croatia). Other options such as Discovery Tour (tour of ancient Roman excavations, numerous sites that have taken away the breath of Romans and Greeks in ancient times, including modern museums and churches), walking on wine roads, mountain biking, free climbing, paragliding, fishing, diving, and swimming, of course, can play a part in entertaining you as well. Vis as an island and as a town is getting recognized more and more, just like the rest of Croatia, as a perfect place to shoot movies and series. The latest one is the mega-hit, a sequel of the musical Mamma Mia, full of mega-stars such as Amanda Seyfried, Mery Streep, Colin Firth, Pierce Brosnan, and Andy Garcia, was shot in Vis, Komiža, and Barjoska beach. Actually, Vis served as a fictional Greek island Kalokairi. They didn’t make any mistake, right? Take a walk, maybe you run into some of the movie gods strolling around…they said they will be back. 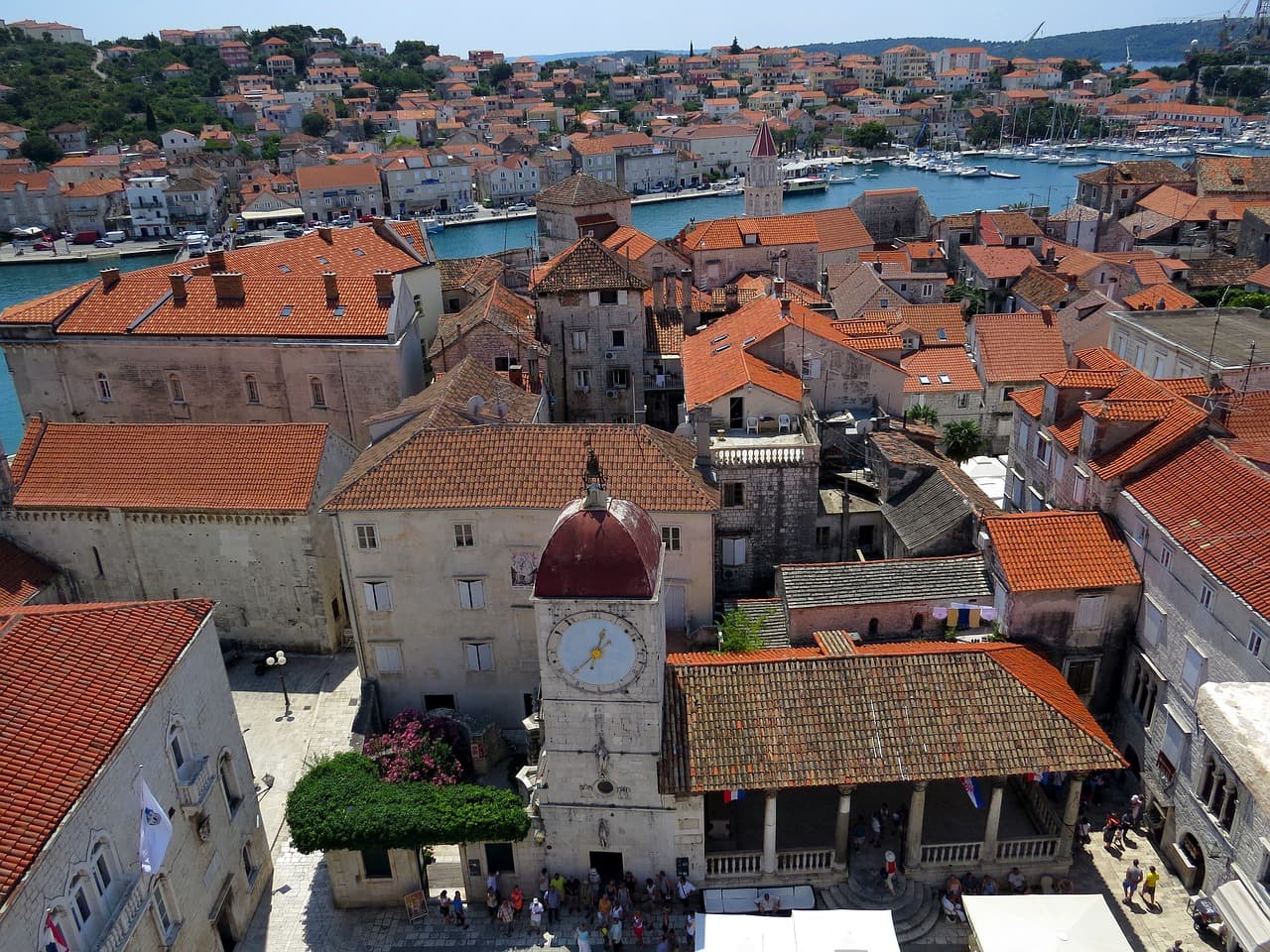 And now...the longest sail of the tour should be from Vis to Trogir, from Issa to Tragurion, from mother to the daughter. The route should take around 5 hours so plan your way carefully if you are to stop somewhere along the way to take a break and a refreshment. If you want to do just that, the Krknjaši bay on the island Drvenik Veli just opposlace to go. Two islands form an amazing Blue Lagoon, well protected from the north winds, where sandy shallows and crystal blue sea set up an ideal scenery for swimming and enjoying in water toys we have prepared for you. Just be focused and keep track of the sea depth as it is often no more than a few meters deep.  Go on to breathe in a little bit of culture, a bit of Greeks, Romans, and Croats, of course, set sail to Trogir. One of the most beautiful and best-preserved towns in Dalmatia, Trogir is no less popular among the tourists than Dubrovnik, just a little bit smaller. :) The oldest part is situated on a small island between the mainland and the island of Čiovo. The famous fort Kamerlengo on the left side will greet you in, not like in Medieval times when it would probably cannon you out of the bay. Lots of marinas around to choose for your base for exploring the Tragurion, Tragurium, Trau, Trogir. Once inside, check this Greek colony founded by Issa in the 3rd century BC. Considered as one of the best-preserved romanesque-gothic towns in Europe, Trogir attracts tourists with the postcard look of the old town depicting the narrow streets between the old stone houses, art galleries and, most of all, Trogir's cathedral. The sheer example of the Romanesque-Gothic mixture of Trogir (the built started in 13th, and finished in the 17th century), the Sv. Lovre cathedral (St. Lawrence) is a must-see. Special attention should go to the Radovan's portal, the main gate of the cathedral finished in 1240 and divided into several parts depicting the most important events and figures of Catholicism. The cathedral is an integral part of the historic core of Trogir, protected as a UNESCO World Heritage Site.

The last day of the Off-Route can finish in the same spirit. You can sail out of Trogir and find a bay on the southern side of Čiovo island, or in front of the Kašjuni beach beneath the Marjan hill, if you want to spend a good part of the day swimming and making good use of our water sports equipment. Keep in mind that you have a 1,5 hour sailing from Trogir to Split, have to arrive before the dark and fuel up before the check out in the morning. Another option is to go straight for Split and head to the Split Old Town, check the Diocletian's palace, Riva (Split promenade), numerous museums and, of course, the restaurants. Tomatoes-tomatos, right? Only with our options, there's no wrong answer. 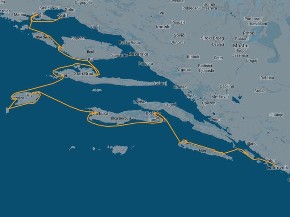 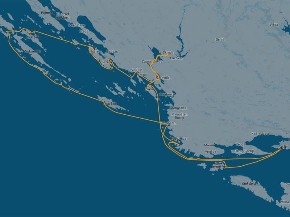 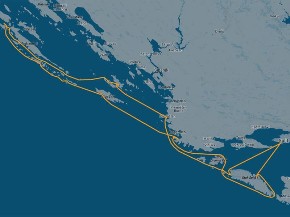