Where to on Mljet?

"The land of the 1000 islands", as they coo it, Croatia is recognizable in the world for the scattered patches of land in the Adriatic Sea. Scattered and shaped by natural forces or by the hand of God as pearls on a turquoise surface, it doesn't matter. Every one of these islands is our nation's pride and, although we cannot even list all of them here, we can present you a short info/guide for the southern Croatian islands that find themselves between the two Dalmatian gems, Split and Dubrovnik. The best, and in most cases the only way to reach those, is by boat.  We will unravel them to you one by one in our Archi(ve)pelago series, handing you the best places to visit, to eat, to drink, to swim, to anchor, to relax.

Unlike Napoleon, who desperately wanted to leave beautiful Elba during his exile, a Croatian island had the greater power to bind the "unfortunate" ones to its beauties. The first one, the Roman proconsul, built and lived in a grand palace, refusing even to end the exile when Emperor Septimius Severus called him back. Furthermore, the king's son mocked his daddy by sending him a branch of a pine tree on one end covered in mussels and on the other hosting a bird's nest. Such was the beauty and wealth of a place where he was to learn his lesson.

One cannot help himself but ask what garnered such feelings, right? Dwell no more and sail out to the beautiful island of Mljet. Full of history, culture, unique places, and unique people, Mljet starts with Pomena, where you can take a berth on the promenade or anchor in front. Small village, most often used as a starting point to the Mljet Lakes as you can easily reach those on foot in 10 minutes. Nevertheless, while hanging around, you can take a diving course at Aquatica or relax and eat at Melody, Adio Mare, Galija, Ribar, or Herc. Paying for the berth here or in Polače, you automatically have a ticket to enter the National Park Mljet. Check Tour suggestions and other handy information on the official web page, where you can find all attractions on this map. St. Mary's island, with a former monastery, is a must-see, as well as the lakes' connecting spots, Mali and Veliki Most. Slide through Mali Most, hike, rent a kayak or a bike and explore using the many paths and roads around the lakes. Cover the lakes on all sides as you don't want to miss anything. Even from below as we are never aware of what lies beneath.The taste of old you can also experience in the village of Goveđari, and the experience of cage ball in a place like this you surely never felt. For a great view of the lakes, climb up Montokuc in the end.

After Pomena, sail to Polače, situated behind the four smaller islands standing like bodyguards in front and at least protecting this beautiful bay against winds. The palace of the Roman proconsul stands tall after thousand years, although locals took much of its stones to build houses and even the road that goes through it! The thing that goes into your stomach is at Gundulište, Stella Maris, Ogigija, and Sponga, all on the same path along the coast. If you want to experience something more like a family meal, Dalmatinac Ivo at the bay's exit is your stop.

The northern side of Mljet may be dull for the more active ones, with few bays and towns along the way, but you should stop at Kozarica to check the small site of Blatina over the hill, catch a fish-or-two, go diving, or at least have a swim at the beach. A somewhat longer sailing section awaits until you reach the three small ports within five miles. Sobra is a ferry port so pay attention to those even though they are on the other side of the bay. Grab a bite at Riva and then a taxi to conquer the hills (you will see another mud lake on your way) and head for Babino Polje, the village with the most inhabitants on Mljet, hidden from winds beneath the steep hill. Boots on! Take a hike along the gravel road to reach the Odysseus cave, as you should know about the link between Mljet and the famous Greek hero. Can someone prove otherwise? You can contemplate all that by re-reading your Odyssey in the Calypso bar next to the cave. Only do it for less than seven years as you need to bring the boat back!  Prožurska Luka is the next nautical stop, Marijina konoba gastronomic stop, and the village above life stop, the perfect opportunity to experience life as it used to be. Imagine living at that time while walking between the small streets and looking down on the port. Better than looking up expecting the climb with the burden on your back. :) Okuklje is similar to Las Vegas. Not in that way! As Vegas with all the casinos, Okuklje has as many restaurants on a square foot. Konoba Maran, Konoba Lampalo, Porto Della Vita, Konoba Baro, and Maestral. Not sure if it is the end. Get them all! Be so kind as to update if you have info. :)

Keep sailing, digesting all that requires a longer section, so push on to the Vratnički cape and bend south to Saplunara. Before you reach it, you can make a stop at Konoba Stermasi to check how much more you can eat before you burst. As you spot the Cape Poljica, guarding the entrance to Saplunara bay, you will see a small cove Limuni, a beautiful place to enjoy in peace as even the boats cannot reach it. If you think on sleeping here, which would come up for sure if you find yourself there at the right time, don't be scared if you hear something other than cicadas chirping around. Mongoose are common on Mljet, and they like to run around during the night. We recommend hiking to it from Saplunara. Once in Saplunara, you can choose between Mala and Velika, with Limuni the only sandy beaches on Mljet. In MS restaurant and Kod Ante have a taste of the traditional as well as the modern Dalmatian cuisine. Inform yourself about the price as this can vary according to the reviews.  Hop back on the boat! Another longer stretch, now to the West. Along the way to the beautiful Sutmiholjska beach, you can revisit Odysseus cave, now from the sea. After that, you can anchor and swim in Ropa bay or visit the village above. Continuing further, you can try Grabova bay or reach Soline gate in the eastern part of the National Park where the Adriatic starts pushing into the Lakes. This is where the monks used to have small saltworks. Take a walk once more if you've missed something during the first tour.

That's about it when it comes to sailing around Mljet. The island of many natural beauties, Mljet is also full of history and culture. Remoteness contributed greatly to the uniqueness of its people and customs. For example, the people on the island often married inside the wider family tree, which can cause some medical problems. The most well-known of those is definitely the Mal de Meleda. Furthermore, Mljet was involved in a great mystery back in 1822, when it went through a series of unusual explosions seemingly starting from the inside of the island. Most probably caused by an earthquake, these events were frequent, appearing over the course of 2-3 years, and they eventually lead to the evacuation of inhabitants. The scientists replaced them on the island, but never gave a plausible explanation of the cause until these detonations stopped on their own. The best thing coming out of that was the start of the underground exploration of Mljet. The sounds similar to these can still be heard on Mljet. The Rikavica cave (Eng. Roaring cave) is a natural phenomenon that imitates the sound of an animal's roar as the waves crash through the narrow entrance, filling the cave with seawater, and causing the compressed air inside to burst out and roaaaaar. The inhabitants also say that this air, finding the way out of the cave through the small cracks in the cave ceiling, causes rocks to fly over the crack. Sometimes people even can't come near such holes because of the strength of these outbursts.

All in all, there are plenty of things to see and hear on Mljet. Follow some of our guidelines, talk to the people from Mljet, and you will have so many things to prey your eyes on that you wouldn't want to leave the island as the legendary Odysseus. But you have to bring the boat back to us, though! :) See you soon! 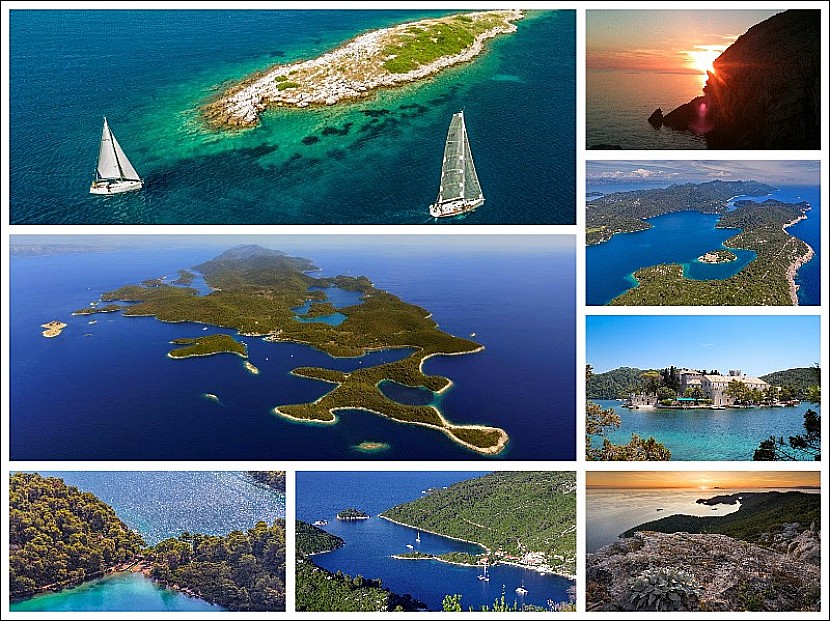